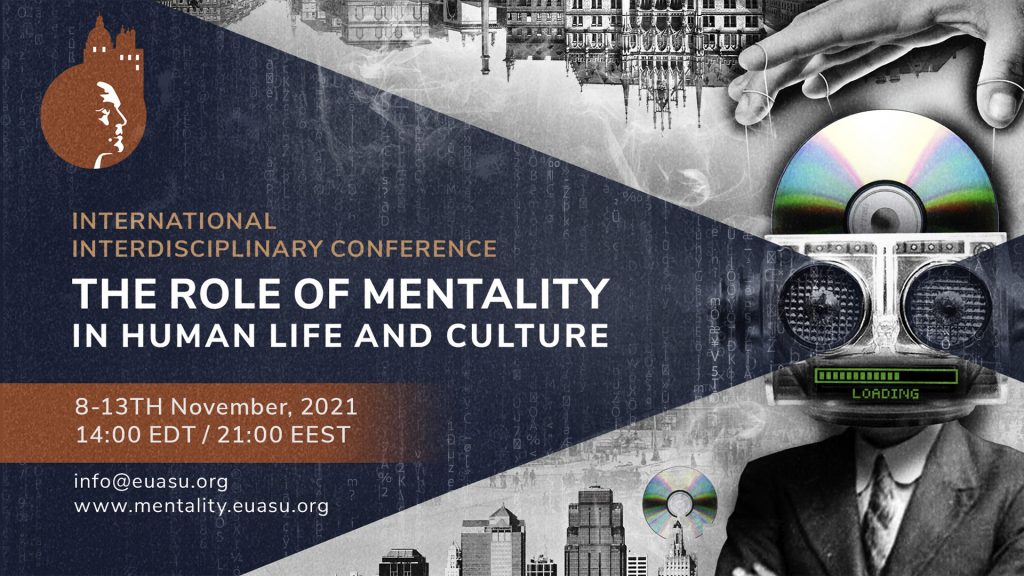 The international interdisciplinary conference “The role of mentality in human life and culture” is dedicated to the unique and insufficiently explored phenomenon of mentality. The significance of mentality in human activity and its role in all spheres of individuals’ lives, society, and culture is unquestionable. Mentality as a scholarly subject intersects a massive range of disciplines: intercultural studies, philosophy, psychology, history, geography, myth and folklore studies, anthropology, criminology; studies related to business, management, communication, marketing, and other areas. In one way or another, all of them have to confront the manifestations of mentality, which becomes either an obstacle to the solution of a scientific or practical problem or, on the contrary, becomes an additional lens for exploring and understanding a discipline’s undertakings and their practical implications.

This conference brings together scientists, experts, researchers, and journalists, from different fields of science and practice, who have studied mentality, its role, manifestation, and influence on various aspects of our lives. Each conference participant and speaker has an opportunity to share their research findings, theories, and hypotheses by addressing the questions of the conference and even an opportunity to raise questions that may not yet have been at the center of research programs on the phenomenon of mentality.

One of the aims of the conference is to provide a comprehensive definition of mentality, which will be understandable and practical not only for scientists but also for people outside the academic community, regardless of their level of training. The main objectives of the conference are: to understand how mentality is shaped in the course of our lives beginning from childhood; its role in different professional domains; its impact on social standing; the scale of personality and stages of personality evolution; interdependence of the level of personality development and mentality of a person; the impact of urban life on personal aspirations; the role of mythology in the mental activity of a person; the relation of mentality “phenomena” to the distortion of history; and also various ways of addressing practical questions such as what can be done to make conscious adjustments in one’s own mentality to shape an effective worldview and philosophy.

Mentality affects the level of personal development and all aspects of one’s life by shaping mental and cultural peculiarities, value systems and tenets, aspirations and commitments, which consequently shape one’s future and life as a whole. The question then becomes: “how does mentality emerge?”A human being is not born with a definite mentality. The phenomenon begins to emerge in early childhood. It is believed that the basis of mental activity is mythologems, i.e., myths and tales that we learn as children. This unfolds a question: how exactly do mythologems impact mentality?

Speaking about the environment, besides the family, it is worth noting the influence of the territory — the city, region, country, milieu. For instance, a criminal environment leaves its imprint on the mentality of a person who grew up in it. For example, a person born in the climate of the Southern-Italian criminal tradition will have a specific view of the world, inherent to this tradition, shaped from his early childhood. The city also directly affects one’s aspirations — what someone wants to become: a symbol of the family (authority for relatives) or a symbol of his city/country (such a person does not try to please his family, but chooses to develop himself as a professional on a larger scale).

Once composed, mentality affects a person’s future because someone making life-changing decisions is always prone to subjective assessment in a manner directly related to his mentality. Consider a case where a person is offered a “dream job,” but it is necessary to leave the home country to get it. However, his mentality contains the belief that one should not leave one’s parents alone. Such a person will decide to stay with his family and give up his dream job, thus making perhaps a life-defining choice.

Consider the business realm. Mentality plays an important, if not the key, role in people’s business relationships and affects a person’s social status. The ability to interact with people from different cultures directly affects success and development as a professional and a personality, in all domains, from a service representative to the head of an international corporation or a government official. What would be the consequences in a multicultural company whose manager does not understand and take into account the differences in the mentality of its employees? How many losses will the company face due to ineffective dealings inside and outside of the company? What is the probability of business processes failing if partners from different cultures do not know the central pillars, let alone the nuances of the culture and mentality of each other? How can one build and implement a successful marketing strategy, taking into account the mentality of the territory where the company enters the market?

“Cultural differences should not separate us from each other, but rather, cultural diversity brings a collective strength that can benefit all of humanity”

History is full of examples where “cultural ignorance” has led to faux pas; we sometimes encounter them daily, some of them are minor and bring smiles, others do not. Let’s say two researchers from different cultures and with different mentalities are working on the same project — an English and Danish scholar. The Englishman politely did not give direct negative feedback about his colleague’s work, noting the strengths of his colleague’s research work instead and merely lightly pointing out its deficiencies. The Dane, whose cultural background suggests that giving negative feedback directly is customary, perceives the Englishman’s feedback as an entirely positive one and makes no changes to his work. However, upon learning from a third party that the Englishman did not like the work, he decides that he has been deceived. As a result, their professional relationship deteriorated and did not continue.

Eastern and Western cultures are vividly different in their characteristics. For instance, in China, it is not common to directly get in touch with a foreigner to cooperate. A person in business will have higher chances of succeeding if he is recommended by a Chinese person to another Chinese. The “guanxi” principle (关系) plays a fundamental role in Chinese business etiquette and in building relationships with partners. The Chinese need to get to know the person they are going to work with. Do not anticipate instantaneous results as it might even take years, thus knowing a person who can help you in establishing collaboration with the Chinese is very important.

The above examples demonstrate that mentality is a phenomenon that covers almost all areas of human life and activity (as well as specific social groups, nations and peoples), from the unconscious level of a person (invisible) to his external professional activity (visible). Yet, it is not sufficiently studied on the scientific level internationally. To understand and study the phenomenon of “mentality” deeply, it is necessary to find answers to many questions, some of which will be addressed in the online discussion panels of the given conference.

The European Academy of Sciences in Ukraine (EUASU) is organizing the international interdisciplinary conference “The role of mentality in human life and culture” to find answers to these questions.

Within the framework of this conference, six online discussion panels are going to be held from November 8 to 13th, 2021. Each discussion will be broadcasted on the Facebook page of our media partners — Granite of Science publication and Expedition Journal  at 14:00 EDT (New York time)/21:00 EEST (Kyiv time). During the conference, four to six experts will be invited daily by the moderator to discuss their research findings on the given topics and questions, which are provided to experts in advance. They are also available on the conference’s website.  All participants submit their papers which address one or several questions of the conference. These papers are published on the conference website and are included in the Collected Papers volume of the conference, which will be published on Google Books one month after the conference and will be accessible for all. 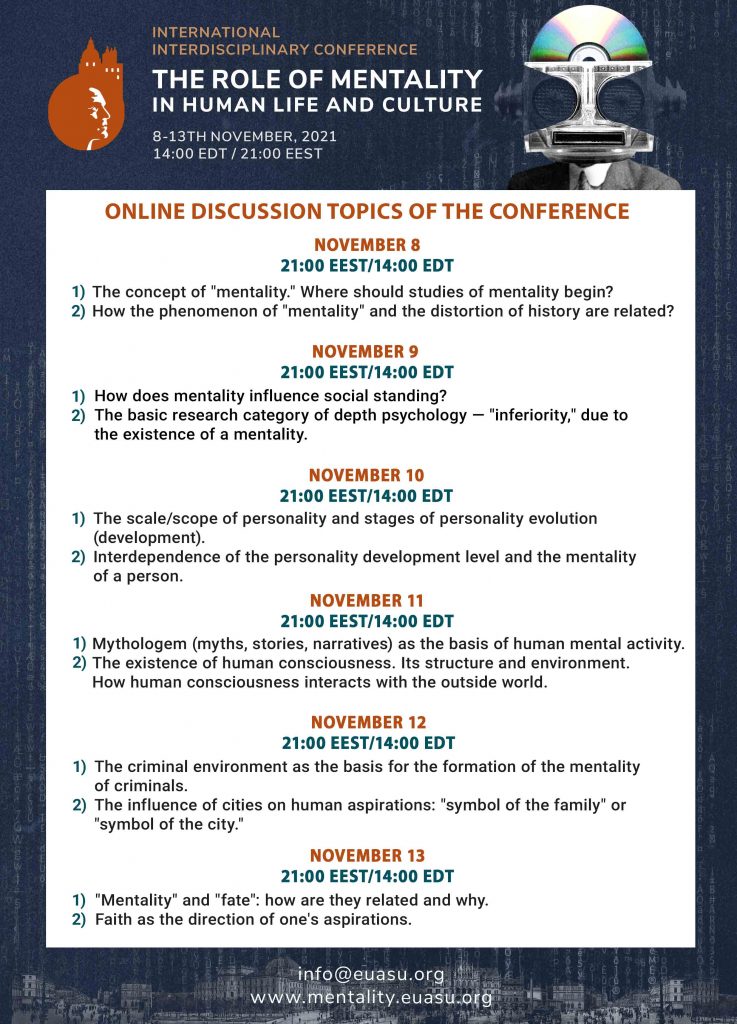 To participate in the International Interdisciplinary Conference “The role of mentality in human life and culture,” submit the registration form on the website, and a member of the organizing committee will get in touch with you shortly.

Speakers
Each conference speaker delivers a speech during an online discussion, addressing the two questions of the specific panel. Speeches for each of the two questions should be no more than 8-10 minutes. The moderator will determine the order of the speakers. There will be two rounds of speeches (for the first question and for the second).

After every discussion panel, Granite of Science — one of the conference’s media partners — will publish an article that will include fragments of each participant’s speech.