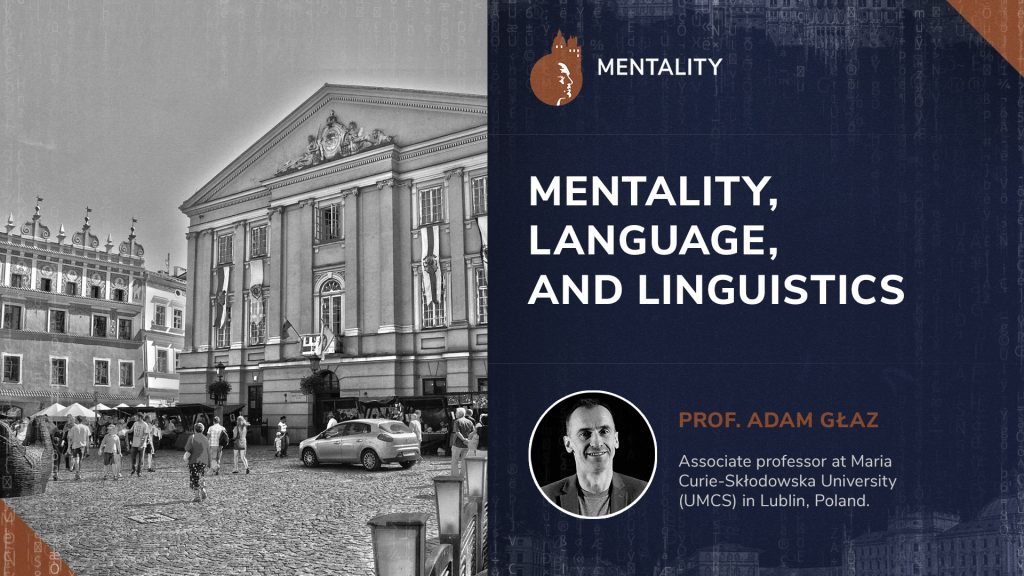 The Merriam-Webster dictionary defines mentality as (1) mental power or capacity (i.e., intelligence) or (2) a mode or way of thought (i.e., outlook, as in “the imperialist mentality”). When we think of mentality so defined in the context of language and linguistics, there are two possible, and in fact opposite, paths we can take. One of them is to say that if language is a system of signs or symbols that is abstracted from its environment and so functions in its own right, it does not seem to be linked with mentality in any way. The other possible path takes us in the opposite direction: we can say that the link between language and mentality is not only strong but that the two are in fact inextricable. This second path then forks into two more specific approaches, each of them correlated with one of the meanings of mentality, as it is defined in Merriam-Webster. If mentality is understood as mental capacity or intelligence, we enter the area of psycholinguistics, the study of mind, the mental processes that humans perform as cognitive beings. If, in turn, it is understood as a mode or way of thought, a certain predisposition towards reality or a system of belief and values, we enter the realm of anthropological linguistics or cultural linguistics. For that, we need to view language in connection with its environment and mainly with its speakers; not as an abstract system but an emanation of human experience, life, consciousness, and worldview. I will briefly discuss these two kinds of connection in turn.

Many authors have claimed that the study of language only makes sense if we want in this way to discover the workings of the human mind. In the 1950s and 1960s, Noam Chomsky initiated a major research programme designed to build a formal algorithm, or a system of algorithms, that would imitate mental operations, where the mind was viewed as a computational machine. Jerry Fodor, in turn, proposed the so called “language of thought hypothesis”, where he claimed that mental operations are ordered and structured, and proceed analogously to language in a form that was called mentalese. In short, this means that thinking is like language. We operate with concepts and link them in ways parallel to how we link linguistic units – so there is a certain grammar of thinking. A different approach is taken in cognitive linguistics, as proposed by Ronald Langacker, George Lakoff, Gilles Fauconnier, Mark Turner, and many others: language is viewed here as a cognitive capacity that follows the same principles as other human cognitive process, such as categorization. It can and should therefore be described with the use of the same constructs that originate in cognitive psychology, such as figure-ground organization, dimensions of construal, or prototype-based categorization. Let me give examples of the first two principles. When I say She played the piano for us yesterday, It was her who played the piano for us yesterday, It was yesterday that she played the piano for us, or What she did yesterday was play the piano for us, I use the same content but organize it differently, each time focusing on a certain element of the message. I treat that element as the figure and set it against the ground of the rest of the message. In other words, I make use of my inherent human capacity to construe the same situation in different ways. Such construal processes have many dimensions, of which the selection of figure vs. ground is just one. Another one, for example, is the degree of specificity: the sentences She played music, She played the piano, and She played Mozart on this magnificent Steinway all mean “more or less” the same but get more and more detailed as we move along. In brief, meaning as it is expressed in language is viewed here as conceptualization, something that originates in the speakers’ mental powers.

But it also originates in culture, to the extent that some authors, like Paul Friedrich and Michael Agar, proposed to talk, not about language and culture but about linguaculture/languaculture. This takes us to the second meaning of mentality as it is defined in Merriam-Webster: mentality as outlook or worldview. Certainly, it bears affinities to the cognitive linguistic idea of language as conceptualization because the power of conceptualization is not only individual – it is also communal or collective. True, cognition is a matter of the human mind but it is also a matter of human minds – and those minds do not function in isolation from one another. Rather, they operate in cultural environments, shaping those environments but also being shaped by them. In other words, cognition can have a cultural dimension. Linguists have argued for decades about the specific links, and the direction of influence, between language, culture, and cognition (if the three can ever be dissociated in the first place) but in anthropological linguistics (or linguistic anthropology, or cultural linguistics) the fact that there are such (inextricable) links is basically undisputed. Wide-ranging research on those issues was, if not initiated, then introduced into mainstream linguistics by Edward Sapir and Benjamin Lee Whorf, whose ideas were questioned, tested, or corroborated by hundreds of scholars. Regardless of the conclusions to specific research, at a certain point it became apparent that one can describe aspects of languaculture in terms of the so called cultural models, which have been defined by Giovanni Bennardo and Victor De Munck as mental representations that are shared by members of a given culture, expressed in various ways through language. So here we are: we have mentality, language, and culture (or languaculture) encapsulated in a handy analytic construct.

Concern with mentality is also crucial in the approach known as cognitive ethnolinguistics, proposed by Jerzy Bartmiński, where the focus of description is the so called mental object: the image of something (homeland, values, family, friendship, etc., as well as of material objects) that members of a given cultural group cherish collectively. In other words, in this approach we ask not what family is but how it is understood but the people who belong to this or that languaculture.

But can we take a more encompassing look and find certain universal meanings? Indeed, Anna Wierzbicka has spent many years in pursuit of precisely those, which she calls semantic primes. Wierzbicka proposes that all languages have the common core of Natural Semantic Metalanguage (NSM), composed of indefinable semantic primes, and that those primes are used as building blocks for all the other, more complex concepts. This takes us back to Leibniz’s idea of the “alphabet of human thought“ but also allows us to study concrete languacultures, specifically though their keywords, or fundamental notions that express their essential beliefs and values. Wierzbicka herself has discussed many of those, such as duša or toska for Russian, and other authors have followed in her footsteps (Carsten Levisen has focused on hygge in Danish, Bert Peeters on tall poppy in Australian English, etc.). Keywords are good testing grounds to show the relativity of cultures and the intimate way they are correlated with their languages. For example, in a recent discussion between Marko Pajevič and James W. Underhill, a major difference surfaced between the German notion of die Abgrund and the basic cultural absence of a parallel notion in English (the abyss appears to be nowhere near as frequent and important for English speakers).

To recapitulate, humans are mental, cognitive beings, as individuals and as communities. They build realities in the form of symbolic languacultures. Those emerge through the workings of mental constructs and constitute spaces in which we live, move, and make sense of the world. Naturally, they also have social dimensions (institutions, human relationships, power struggles), as well as material ones (physical objects). We are talking here of symbolic realities that use language, culture (languaculture) and mentality/cognition for their building material.